I have been made Honorary Colonel of the Royal Armoured Corps Training Regiment (RACTR).

I was given the honour during a parade involving 250 RACTR recruits at the Regiment’s home in Bovington, Dorset.

Her Majesty the Queen granted approval earlier this year. I served with the British Army for a decade before becoming an elite athlete.

To be given the role of Honorary Colonel for a regular unit, it’s the first time that’s ever happened. It’s been signed off by the Queen, it’s changed Army policy and it’s me, so I’m very proud. I hope through this role that I can be an inspiration to recruits. 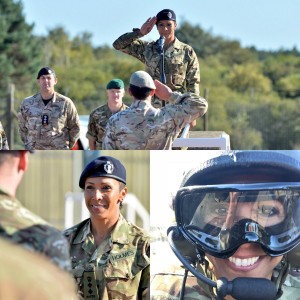 The parade was also attended by the Defence Secretary Gavin Williamson. Gavin said: “Kelly is an inspiring individual. It’s a brilliant recognition of an amazing woman.”

My first appointment as Honorary Colonel will be on 11 November 2018.